How to Write Emails That Sell: An Analysis of Influential Language

BY  JOHN BONINI As part of the research that went into his 2012 bestseller  To Sell Is Human , author and speaker Daniel Pink surveyed... 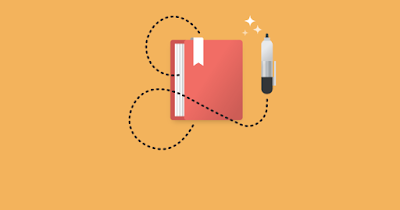 As part of the research that went into his 2012 bestseller To Sell Is Human, author and speaker Daniel Pink surveyed people on the first words that came to mind when they heard “sales” or “selling.”


Among the 25 most frequently used adjectives or interjections were words like “pushy,” “sleazy,” “manipulative,” “annoying,” “ugh,” and “yuck.” (I could go on, but you get the idea.)
This research validates some of the experiences many people have with salesmen.
But it also has an unexpected effect on marketers and salespeople, as many have become fearful of coming across as too “salesy” in their efforts. They’ve developed defense mechanisms in the form of a more passive sales approach, avoiding words or situations they fear people will associate with a sales pitch, resulting in unfavorable responses.
Other marketers and salespeople hold such findings with little to no regard. They approach their job with the level of authority they feel is needed to persuade and influence others to buy.
As Henry Ford once said, “If I had asked people what they wanted, they would have said faster horses.”
Translation: I know what’s better for my customers than they do. Of course, this worked for Ford, but does it actually work for most communicators?
Not quite. As we’ll learn, most people are turned off by the dominant sales pitch. But does that mean they’re turned off by sales in general, or is there a better approach to take in our email campaigns?

HOW DO PEOPLE REALLY FEEL ABOUT SALES?

People aren’t actually afraid of being sold to. Instead, they don’t like a sales pitch that takes a dominant approach for a product or service that doesn’t align with their needs and interests.
In his book Give and Take, author Adam Grant details research that suggests two fundamental paths of influence: dominance and prestige.
A sales pitch relying on dominance uses powerful communication—a method of selling in which, according to Grant, the communicator aims to “claim as much value as possible by striving to be superior to others. They speak forcefully, raise their voices to assert authority, express certainty to project confidence, promote their accomplishments, and sell with conviction and pride.”
These types of pitches tend to be more brand-centric, wherein you’ll read lots of “I’s” and “We’s” and very little about you as the customer or subscriber.
Methods which are commonly used to pitch via email. In fact, you may find them in your inbox fairly often. (Gmail users: Check your promotions tab.)
Many times, the sender practicing powerful communication attempts to influence you with their credentials, like this: 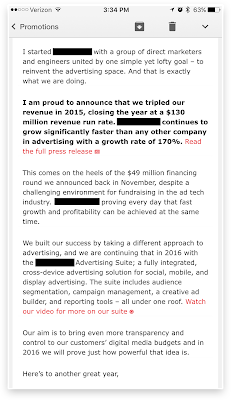 If you couldn’t get through more than a few lines of that email, believe me, I don’t blame you.
Other times, the sender wastes no time (or all of it, depending how you look at it) jumping right to the pitch. 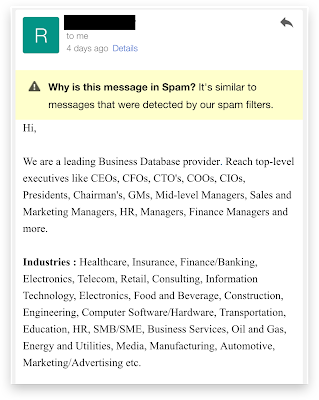 This salesperson, writing on behalf of the company, opened with a textbook power word in describing his company as a “leading” provider. After that, he jumped right into the pitch with no regard for the recipient.
Not ironically, this email was marked as spam and had to be fished out of a folder with many other messages just like it. Not only are these emails less effective at gaining influence, they’re apt to be marked as spam and go unseen by your audience.
These are the kinds of sales pitches that drive survey results like the ones we saw in To Sell Is Human. The more you attempt to dominate an audience, the more they resist.
As Grant writes in Give and Take, “Even with a receptive audience, dominance is a zero-sum game: the more power I have, the less you have.”
In other words, the more you try to secure dominance, the higher the risk you run of losing influence.

While marketers and salespeople aiming for dominance use powerful speech, those looking to secure prestige use powerless speech.
Grant classifies them as follows:
Tentative speech suggests that, as the communicator, you’re willing to take someone else’s opinion into consideration. That you’re willing to defer, negotiate, or even rely on them for the answer.
Here’s what it looks like in action: 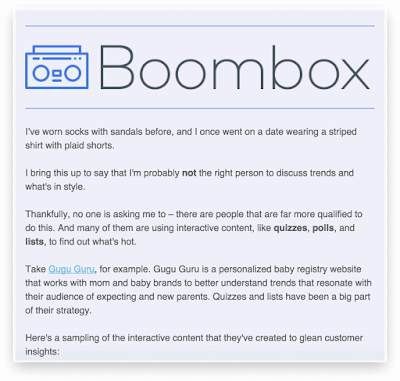 Rather than using powerful communication to express certainty, Boombox—an app for online publishers—uses powerless communication to create influence instead.
There are no credentials, product specs, or power words. In fact, the marketers at Boombox relied on a case study to sell their product, using hedges and disclaimers to defer the message.

Asking questions shows people that you care enough about their interests to continue learning about them. Sure, the end goal is for brands to sell product, but when they do so with the customer’s best interests in mind, people aren’t afraid of being sold to.
Take this email I received from The North Face, as an example: 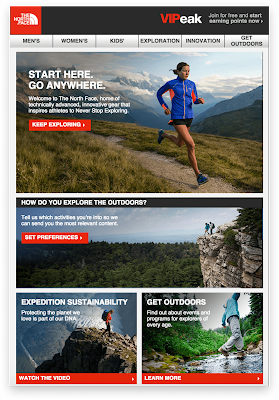 Besides the noticeable absence of any discernible product pitch, The North Face is using powerless communication to ask for my outdoor interests in order to provide a more personalized experience moving forward.
Not only are questions effective at deflecting the focus to the subscriber, they’re also effective drivers of action. In Give and Take, Grant refers to research conducted by American psychologist Elliot Aronson, where it was learned that by asking people questions regarding behavior, they were then more likely to exhibit said behavior.
For example, if you ask someone if they’re planning to vote, you’ve just increased the odds that they will actually vote by 41 percent. Research also shows that if you ask someone if they plan on buying a new computer in the next six months, they will be 18 percent more likely to do so.
But why?
As Grant notes, “when I ask if you’re planning to vote, you don’t feel like I’m trying to influence you. It’s an innocent query, and instead of resisting my influence, you reflect on it. This doesn’t feel like I’m persuading you. You’ve been convinced by someone you already like and trust: yourself.”

DON’T BE AFRAID OF SELLING

Keep in mind that research that positions sales unfavorably consists mainly of experiences with sleazy and dominant pitches riddled with powerful communication techniques.
No matter what you’ve heard, don’t be afraid of selling to others via email.
The favorable experiences aren’t accounted for in such research. This is where, as email professionals, your opportunity lies.
Become part of the small percentage of sales emails that utilizes powerless communication, expresses uncertainty, and deflects the focus on the customer.
In other words, write emails that sell.
Source