by Anik Singal In this post I’m going to walk through a Powerful Problem-Solving System I have used to… Manage a chronic illness ... 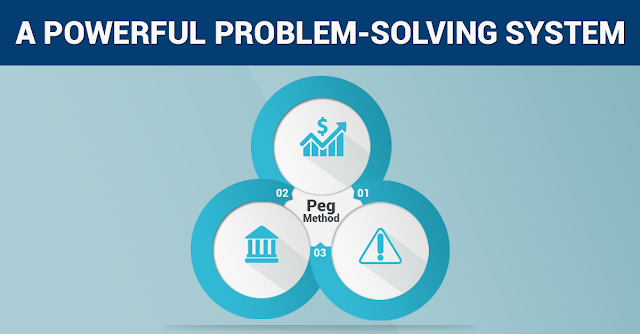 With this system, I’ve been able to walk right up to ANY type of problem — no matter how tricky, scary or complicated — look it straight in the eye and take complete control.

I call this “The Peg Method.”


It doesn’t matter what part of someone’s life the problem affects.

The Peg Method connects 3 things — goals, problems, and assets — and puts them all together to get success. That’s what the diagram above is about. Don’t worry if it doesn’t make sense right now.
This post will explain how to use it in detail.

The best part about The Peg Method is it’s fast. Even if someone has been struggling with a problem for years, they can follow the steps and map out the solution and their entire action plan in as little as 55 minutes.


Imagine finally taking control of a lifelong problem in under an hour. With The Peg Method, it’s possible! The weird thing about The Peg Method is that I think I was born with it. Looking back, it was always just “there” in the background. I’m pretty certain that I was using The Peg Method when I was just a little kid, without even realizing it.

In some form or other, The Peg Method has always operated for me subconsciously, helping me make all kinds of decisions and get to my goals.

But guess what?  For all its power, I never consciously formulated The Peg Method until recently.
It all came together when a friend who had a big business challenge came to visit. It really proved the truth of one of my favorite sayings: never underestimate the massive power of helping someone.

In the process of helping out a friend, The Peg Method literally unveiled itself. What I was doing subconsciously suddenly emerged as a complete, elegant system. I was then able to reverse-engineer this life-changing technique. It’s not only a cool story, it explains pretty well what The Peg Method is. So I’ll tell it right now…

How I Discovered The “Power of Peg”…

My friend Ben and I sat down together in the conference room. I said, “Just talk. Tell me what’s going on. I’m not going to say anything, I just want to listen. What are your issues? What are your problems? Tell me everything you’re facing in your business. What are your goals?”

Ben talked for almost an hour. He didn’t have just 1 problem or issue—he had at least a dozen. My brain was whispering in my ear, “Whoa, there’s way too much going on here!”

Even I was getting lost, and I’m accustomed to dealing with some pretty complex business matters. Ben was literally drowning in ideas, obstacles, proposals, challenges, plus financial targets that were all over the place!

My brain started tugging at me again, “Dude, we’ve got to SORT and SIMPLIFY. Ben desperately needs some CLARITY.”

I think best when I can draw and diagram things out.

So I walked up to the white board and created 3 columns: GOALS, PROBLEMS, ASSETS.

It just came out that way, without conscious thought.

Then I asked Ben, “Hey, can we start to break some things down? Sort things out? Why don’t we start here. Tell me what your goals are.”

Next I said, “Now we’ll list what your problems are.”

Finally I said, “Tell me what your assets are.”

Ben looked puzzled. “What do you mean by assets?”

“Assets are EVERYTHING you’ve got on hand that can help you. Assets can be people, products, information, money. In business assets can be data, stuff you own, a line of credit and your team. Assets can even be personal traits like persistence, creativity or the ability to sing like the three tenors!”

Then I said, “Okay, let’s just be quiet for a couple minutes, I got to look at this.”

I stepped back and just stared at it.

Ever see that movie “A Beautiful Mind”? Remember how John Nash is just staring at a bunch of random words and suddenly sees it all decoded into a perfectly clear system? That’s how I suddenly felt!

I said, “You know what? If you use this asset to make $50,000, then it automatically resolves this problem over here.”

Then I drew a staircase.


I took each goal and put it on its own stair. Then I started putting assets and problems on each step.
In a few minutes we had his entire 2010 business plan mapped out! 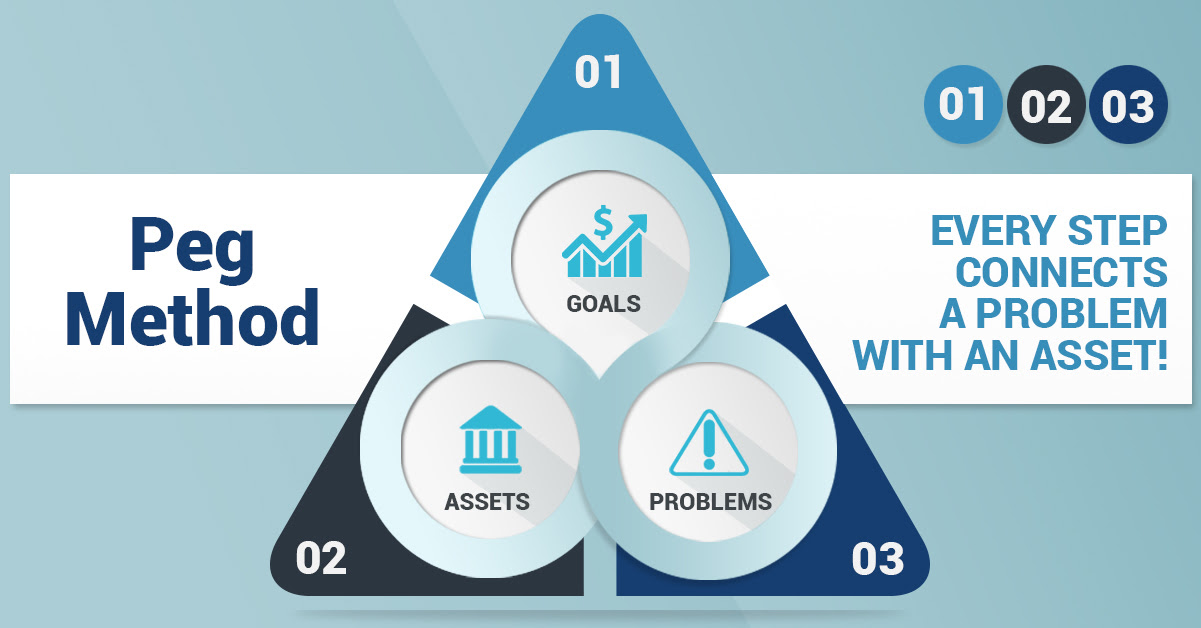 When we were all done, Ben turned to me and said, “So, what do you think about a workshop?

Should I do a workshop in October?”

I replied, “Hmm. Good question. Where do you see a workshop on this list?”

“Haha! Then why are we talking about it? Does it fit anywhere?”


How To Use The Peg Method

Instant clarity with a simple staircase!

The Peg Method is the easiest way I’ve found to map what someone should do in their personal and professional life.

Just like in Ben’s example, when someone “Pegs” they make 3 lists:


These 3 lists are the core of The Peg Method.

With these lists someone sees what they want, what’s stopping them and what they have right now. 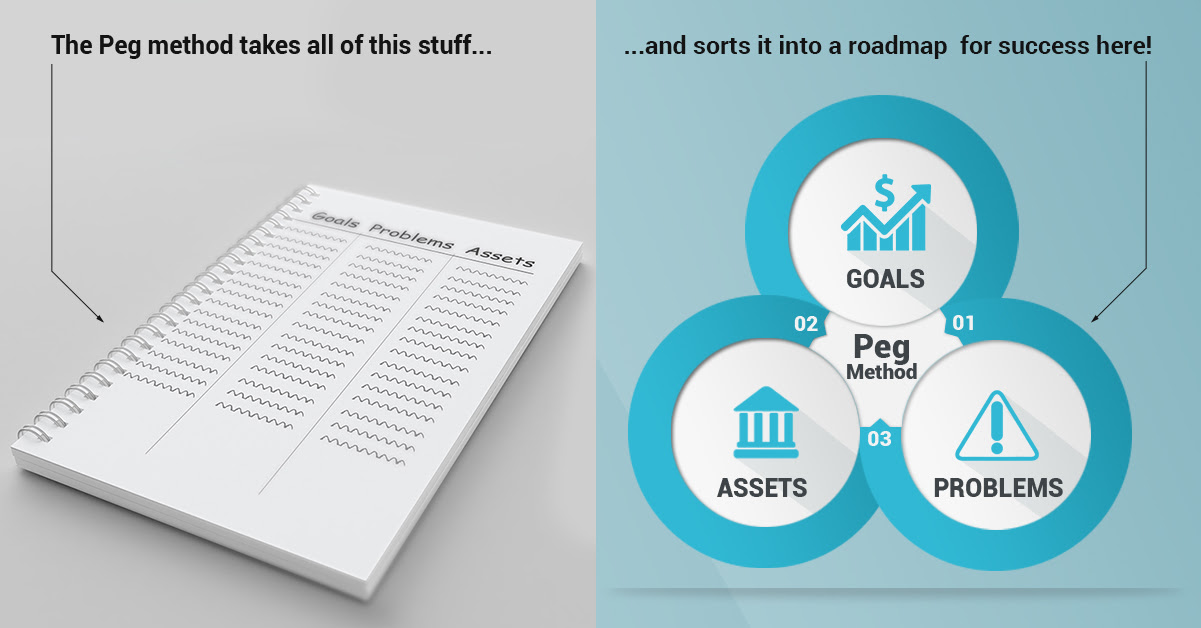 I could come up with dozens of examples of how to use The Peg Method, from highly complex to drop dead simple.

For a sample of the Peg Method, though, I’m going to walk through 2 examples.

The first is a goal that may seem like a far out thing for most people: doubling their income in one year.

Whoa, doubling income? That’s quite a leap for many people (unless they were unemployed the previous year!).

The second example is a goal that may seem EVEN MORE far out: making $1 million.

Sound a little ambitious? I understand.

But with the help of The Peg Method, it’s clear that both of these goals are DOABLE.

Let’s start with the first one: doubling income.


Steve is a middle manager making $50,000/year. That’s a decent middle class wage, but Steve wants more. He’s got a kid on the way and wants to start making 6 figures as quickly as possible.

Can Steve do this in less than a year?

The first thing Steve needs to do is take out a piece of paper and start writing things down. He should make 3 columns — GOALS, ASSETS, PROBLEMS.


In this case, we are going with a big, top-level goal up front. This is definitely an ambitious goal that is not going to just fall into his lap.

He’s going to need to create a solid plan to get it!

With the goal in mind, Steve should list out the biggest problems and assets associated with this goal. For the sake of keeping this post short, I’ll simplify them a bit, but the idea is the same.

PROBLEMS standing in the way:


Now for his ASSETS. What are the things working for Steve?

ASSETS that can help:

Here’s a picture that illustrates Steve’s lists, with the big goal at the top.

When someone looks at that goal, it’s pretty overwhelming. How can Steve tackle something that big?

Simple: by breaking it up.


Even the biggest, most far-out goals become 10x more manageable when broken down into a bunch of mini-goals.

Remember the old joke about “How do you eat an elephant? One bite at a time!”?

It’s the same with goals—especially big ones like doubling an income.

On the other hand, when Steve is looking at jumping from $50,000 to, say, $70,000, all kinds of possibilities emerge. Breaking up goals lifts the fog and makes opportunities appear.

I’m the type of person who LOVES crossing things off my to-do list. If it takes me months to cross something off, I become demotivated.


That’s a problem a bunch of people have with reaching big money goals. They make a little headway — a few thousand dollars or so — and then stall. It takes too long to get the satisfaction of achieving the big goal, so they give up.

But what happens when someone breaks down their goal and makes every few thousand dollars its own win?

They get the satisfaction of lots of small victories. Lack of motivation is no longer a problem, and it’s easier to keep going!

What Steve needs to do is draw a staircase on his Peg Diagram.

Here’s how it works:

Here’s how it looks on the diagram: 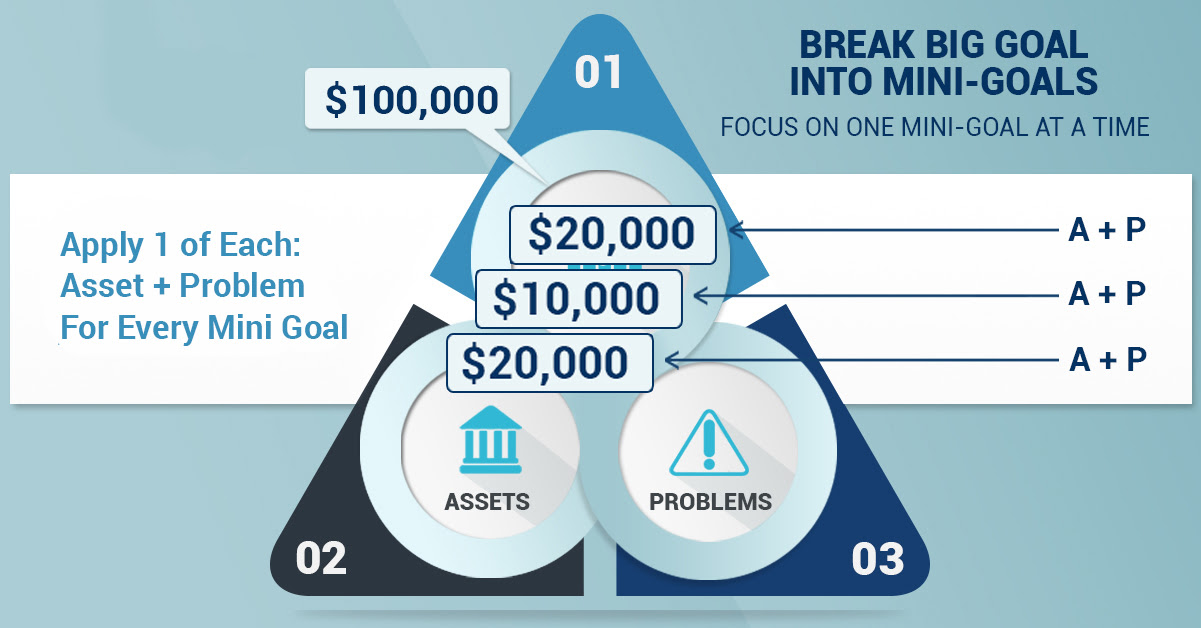 STEP 3: Put A Problem & An Asset On Each Step


Now what happens? How does Steve pull everything together into a plan?

Simple: he associates a problem and an asset with each step.

Doing this is a LOT easier than most people think! The problem-solving goes very fast at this point.
The first problem Steve should tackle is motivation. Motivation kicks in automatically for most people once they see results… but until results happen, motivation is usually zero!

Steve needs to use an asset that will get him quick results. The lowest hanging fruit available to him is working some overtime.

If he works an average of 10 hours of overtime each week, that will earn him an extra $18,000 over the course of the year.

It makes sense for him to deploy this asset first because he will see an immediate increase in each paycheck. Within a month, the amount in his bank account will be higher. That will motivate him to keep going!

Steve brings down his mini-GOAL ($20,000), his PROBLEM (Motivation) and matches it with an ASSET (Overtime).

Now here’s something important about this step: Steve should not worry about (or even THINK about) $100,000! The BIG goal should be OUT of his mind.

All he should focus on is that first step.

It’s easy to see that simply matching a problem + an asset with a goal can really open up someone’s mind.

It takes away the clutter. It eases the pressure. It allows us to relax. The stress goes away. We’re focused on chunks. We’re eating the elephant, but it no longer looks overwhelming, intimidating or discouraging.

This exercise can also eliminate a lot of negative self-talk.

We all have that little nagging voice in our head that whispers, “Ugh, this is such a BIG goal… it’s so HARD… I’ll NEVER do it.” With The Peg Method, we forget about what we CAN’T do. Instead, we’re focused on a small goal which we CAN do.

Here’s a little diagram that shows what’s really happening. We’re just taking a list of Goals, Problems & Assets and arranging them on the staircase.

Every step on the staircase is an attainable goal.