BY  KAYLA LEWKOWICZ Before the rise of the Internet and everything mobile (now up  to 56% of opens in September ), the news used to tak... 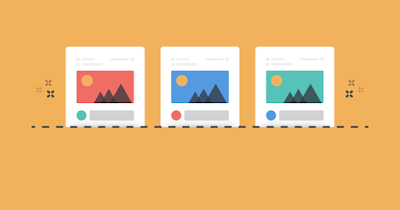 Before the rise of the Internet and everything mobile (now up to 56% of opens in September), the news used to take time. We’d have our coffee and read the paper page by page. And we knew exactly what to focus on: what was above the fold. That’s where the biggest stories broke each day. If you weren’t sure you wanted to buy the paper, what was above the fold would also serve to entice you to buy, since most newsstands displayed them like so: 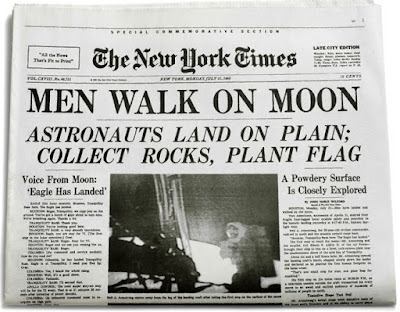 Now, the news is instant and 24/7, sometimes in as few as 140 characters. Even though the sight of an actual newspaper may be foreign to many cellphone-happy millennials, the term “the fold” has stuck around. For email and web design alike, “above the fold,” is still used to indicate relative importance—and also acknowledges the shrinking attention spans of readers today.
For email marketers, the fold has been a longstanding concern, whether that’s trying to optimize emails to render correctly in Outlook’s preview pane or for newer preview functionality like that in Inbox by Gmail. Marketers know they only have a short amount of time to grab the reader, which made “the fold” a clear demarcating line.
Because of widespread belief that attention spans have shortened and that people don’t read, marketers became obsessed with cramming their important information and CTA above the fold. But scrolling is actually easier than clicking, and subscribers come to expect it. While you can still lead with your most important content, you no longer have to. We’re here to debunk once and for all the idea of “the fold” in email.

SAY GOODBYE TO THE FOLD, HELLO TO “THE SCROLL”

According to Alex Williams, VP & Creative Director at Trendline (and a speaker at Litmus Live in 2016), mobile also has a fold: it’s called the “scroll.”
What does this mean?
Above the scroll means that you have to entice your reader to scroll down—show them why they should read your email in its entirety—by providing compelling and memorable content up top. The goal is to set expectations that your content will be relevant and interesting all the way down the email, and to be memorable right away, thus initiating the scroll. 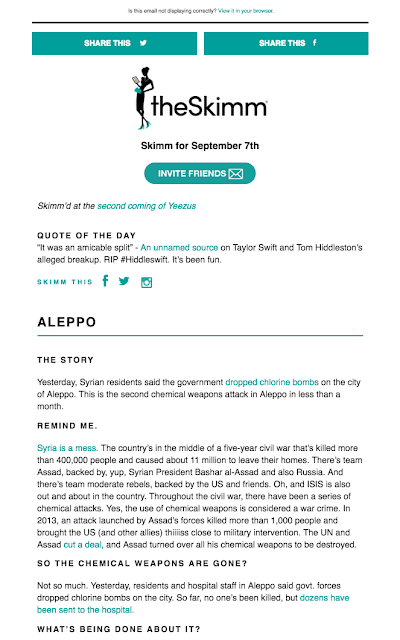 In the above example from one of my favorite daily newsletters, theSkimm, you can see they don’t lead with the most important piece of information (well, #Hiddleswift was kind of a big deal). Instead, they break each section of the email into sections, just like a newspaper.

SUBSCRIBERS THAT DIDN’T CLICK ON YOUR HERO IMAGE, BUT ARE STILL SCROLLING, ARE BIG OPPORTUNITIES. —ALEX WILLIAMS

Because the information is relevant and easy to understand, they’re counting on subscribers scrolling all the way to the bottom, rather than clicking on the first piece of content without reading anything else.

Back in the days of print marketing, the envelope was key to that first step in subscriber engagement: the open. Known as the Johnson Box, this gave mail recipients a window into your mail offer. Designed to draw the reader’s attention to the key message, it also served as a way to entice readers to open the letter—just like the subject line and preheader text in email today.
Regardless of the type of email you’re sending, initiating a scroll starts as early as the envelope in your email’s subject line and preheader text. Experiment with teasing an article in your subject line or preheader text that isn’t found until lower in the email. This can build up anticipation to get to the reason the subscriber opened the email in the first place. 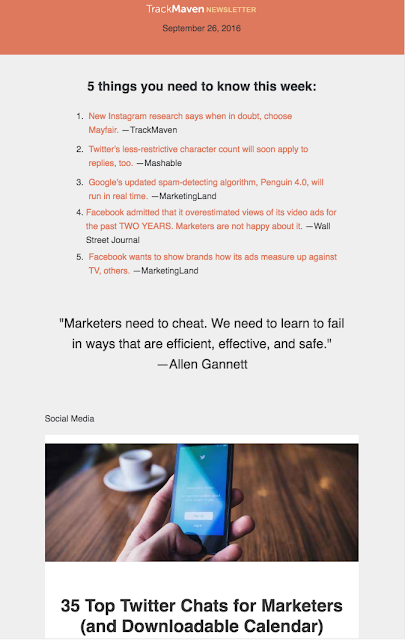 In this example from TrackMaven’s newsletter, the content from the subject line (“35 Top Twitter Chats,”) isn’t shown until below the fold. Instead, they lead with top news stories from the past week. The top content is still relevant (and since they include it in every newsletter, expected), but to get to the content teased in the subject line, you need to scroll.

However, this doesn’t mean “the fold” is completely useless. As with most things in email, the answer is: “it depends.”
When it comes to promotional email, marketers tend to send out three different categories, which relates to the three main areas of the marketing funnel:
(Want to brush up on your definition of conversion? This article talks through exactly what it means.)
Each type of email requires a different mindset because you’re asking for a different level of commitment on the part of the subscriber. When you set your goals for your campaigns, enticing the scroll makes sense for some categories but not for others.

Awareness emails buy time, rather than buy clicks. How can you get your subscriber to keep reading for two more seconds, and then two more after that? The more they read or see, the higher the chance there is of something happening. Make your awareness emails creative, interesting, and above all, incomplete.
That doesn’t mean leaving the subscriber completely hanging or not finishing a sentence. It means keeping the curiosity gap high at all points in an email, so that they’re constantly wondering, “What’s next?” and satisfying them at each scroll. 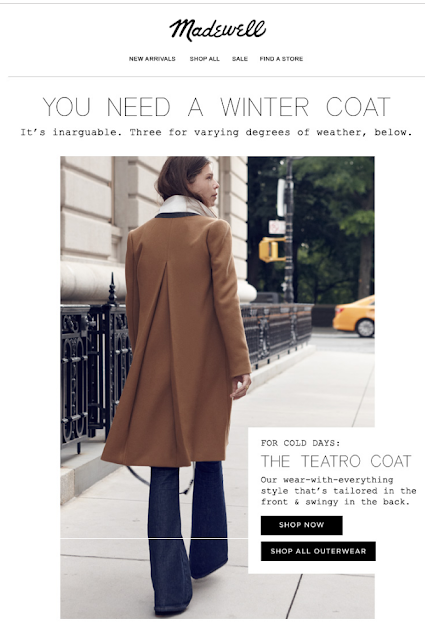 The copy at the top of the email makes it super clear that the subscriber needs to scroll to see more winter coat options. Boom. Curiosity gap. 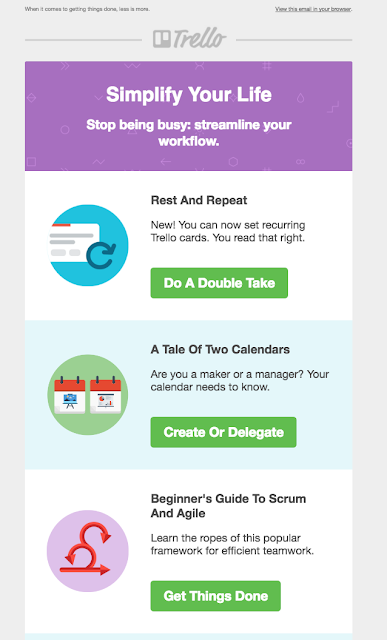 This product update from Trello doesn’t shy away from showing multiple pieces of news or completely different calls-to-action. The idea is to make people aware of new features, not sell them (though some of those features might require a plan upgrade). 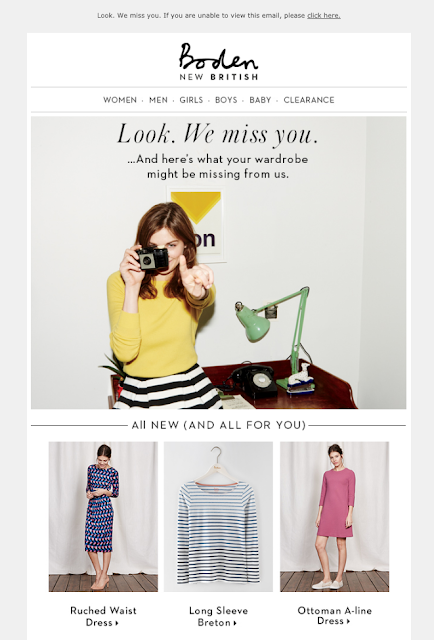 This email doesn’t have a sale or promotion until the very bottom. Instead, the focus is on re-engagement and awareness—hey, here’s what you might be missing!

Engagement emails start the conversation with your subscribers in a deeper way than awareness or conversion. They’re to be used sparingly, as they can be incredibly powerful.
To promote Litmus Live 2016, we decided to gamify our email to build excitement, increase engagement, and have a little fun. To reveal our third city, users sent in guesses via Twitter, which then populated a dynamic Twitter “collage” at the bottom of the email itself. We expected it to take 3-4 hours to get 500 shares using the hashtag #TEDC16. (Read why our new hashtag is #LitmusLive here, short version: politics.)
We were blown away 90 minutes later when we hit the mark! Our audience relished the opportunity to engage with us. The entire email worked together to reveal the city and encouraged subscribers to open the email again and again for updates. This completely flips the idea of a “fold” on its head, since our subscribers checked the email continuously to see new Twitter feed updates.

Conversion emails are usually short and to the point, with one ask, so it’s completely clear to the subscriber what action you want them to take. It might be a sales promotion, but it might not. Whether you’re focusing on buying a product or encouraging them to read an article, conversion emails focus on getting the click.
Because of their direct nature, conversion emails often benefit from having the CTA above the scroll to close the deal. It’s fine to include more options after the “scroll,” but those should be more opportunities for them to learn about that same one objective. 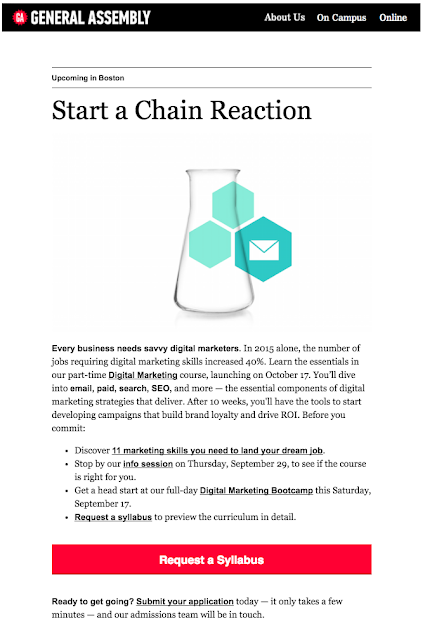 In this example, General Assembly is clear about what action the reader should take: request a syllabus to learn more about their digital marketing class. The objective is clear, to the point, and there’s no need to scroll—you can’t miss that big red button. 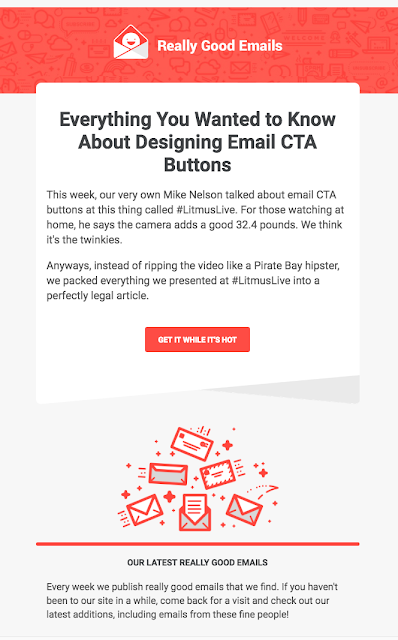 This email is a great example of how to focus on exactly what you want your subscriber to do in the top section of your email, but still include information below for those who do want to scroll. It’s clear what action they want you to take.

DON’T DESIGN EMAILS IN A VACUUM

REMEMBER, YOUR MOST IMPORTANT JOB AS AN EMAIL DESIGNER IS TO GET THEM TO OPEN THE NEXT ONE. —ALEX WILLIAMS

When you design emails, you have to think about the overall subscriber journey. Each email isn’t independent—every awareness email you send can ultimately contribute to that purchase when a subscriber does receive a conversion email.
The most important thing to remember about the scroll? Set up expectations as a brand that provides compelling enough content that subscribers will want to scroll—and keep scrolling.
Source