9 Things You Need to Know About Email in iOS 10 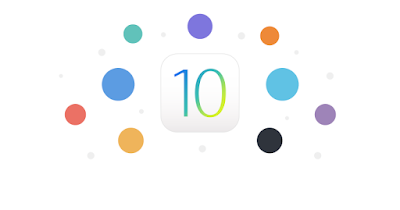 This week, Apple released iOS 10, its brand new mobile operating system, to the public. With iOS Mail accounting for 44% of all email opens, changes to the mobile operating system and its email rendering can make a big difference to the email world. So it’s no surprise that email geeks have monitored upcoming changes to iOS 10 since the early days of its beta test phase. Will the new operating system make our lives easier or will it come with inevitable quirks that often go along with new iOS releases?

But first, let’s get the terms straight:
iOS is Apple’s mobile operating system that runs on both iPhones and iPads. iOS Mail refers to the native Mail app on these mobile devices. Apple’s desktop Mail application, on the other hand, is what we call Apple Mail.
Here’s everything email marketers should know about iOS 10 and the updates it brings to Mail on iPhone and iPad: 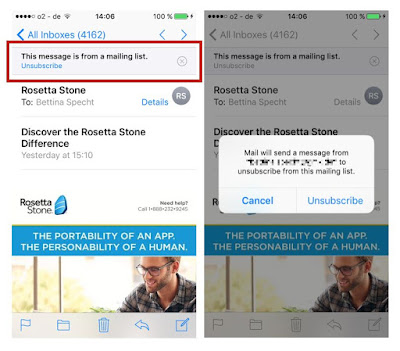 2. VIDEO IN EMAIL IS BACK

Email marketers weren’t amused when Apple stopped supporting the HTML5 <video> tag with the launch of iOS 8 back in 2014. While many email geeks thought—or hoped—that this was just a temporary bug to be fixed soon, Apple did not make any changes for a very long time. Neither updates to iOS 8 nor the release of iOS 9 changed the missing support of HTML5 video.
With the launch of iOS 10, Apple brings back support for HTML5 video, allowing email designers to embed videos directly into the email.
Similar to Apple’s desktop application, Mail on iPad allows for videos to play right within the email. iOS Mail on iPad displays a play button on video content, and as soon as a reader hits the button, the video plays right within the body of the email, and even keeps playing as the reader scrolls through the message.

In contrast to Apple’s desktop and iPad application, however, videos in Apple’s iPhone client don’t play inline. Instead, when hitting the play button, the video starts playing in full-screen mode. 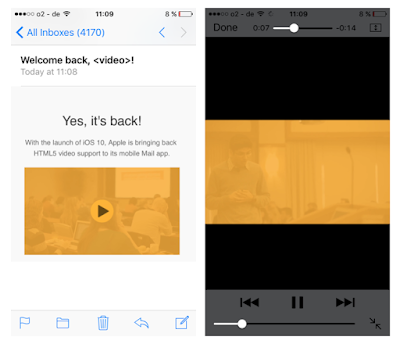 While iOS doesn’t allow for videos to be played directly within the content of the email, it still makes video content more accessible. Without HTML5 video support, email marketers had no choice but to send their subscribers to a landing page to view video content. With HTML5 support, the video content displays in a separate full-screen window, but it takes subscribers back to the email once they’ve finished viewing it.
Email marketers who’d like to include moving elements directly within the mailing must still rely on CSS animations or animated GIFS. Also, advanced techniques like using a video background in email is not possible in iOS 10.
For many brands, video content plays a key role in their marketing strategy, but the limited support in email made it hard to take full advantage of this powerful medium. With video support returning for iOS 10, email marketers might now consider adding video content back to their toolkits—despite of the limitations mentioned above. However, remember to have fallbacks in place for where HTML5 video isn’t supported.

iOS 10 brought changes to how it auto-scales email in its mobile email client. Even responsive emails can thus appear to be zoomed out or off-centered. 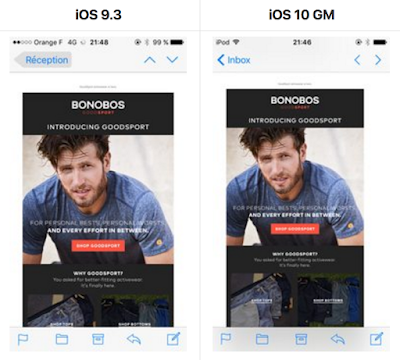 Email developer Remí Parmentier has put together a list of autoscaling bugs he encountered in iOS 10, and points out that adding a “padding:0;” to the <body> tag of your email is a great fix in case your email doesn’t scale correctly.
It looks like the Apple team is already aware of this bug and is working on a fix. In the meantime, Apple Mail engineer James Magahern suggests to disable auto-scaling completely. Here’s the fix:

In web design, iframes are often used to embed external content, like forms or videos, into a website. But since iframes often rely on JavaScript, most email clients do not support their use in email.
iOS Mail, however, was one of the very few email clients to offer limited support for iframes. For example, while it wasn’t possible to embed a web page that had JavaScript, you could use iframes to embed basic HTML and CSS into an email. In some edge cases and for very advanced campaigns, <iframe> could be leveraged as a way to deliver dynamic content. With no support for it in iOS 10, this approach is no longer possible.

Even though position:fixed; was only supported in a limited number of email clients, it was a handy tag that allowed for creative effects and interactive email. In Taco Bell’s fantastic breakfast journey email, for example, fixed positioning was used to mimic movement of elements within the email as the reader scrolled to the bottom of the message.
iOS was one of the clients that offered support for fixed positioning in the past, but with iOS 10 this is no longer the case. Without iOS, the support for fixed positioning is so limited that building campaigns that rely on this technique simply doesn’t make sense anymore.

Remi Parmentier also found that we can use @supports declarations in CSS to target iOS 10. We can target iOS with the proprietary property “-webkit-overflow-scrolling” that is only supported on iOS. If we use this in combination with one of the properties introduced in iOS 10’s Webkit version— #RGBA color notations, for example—we can specifically target iOS 10.
Here’s a media query that will target iOS 10:

8. IOS 10 MAIL GETS ITS OWN SECTION IN THE SETTINGS

Previously, iOS Mail shared a menu setting with Apple’s calendar and notes app. With iOS 10, the email app gets its very own space in the iPhone settings. Here, Apple users can: 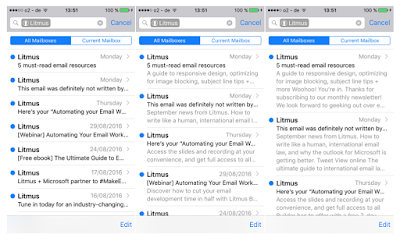 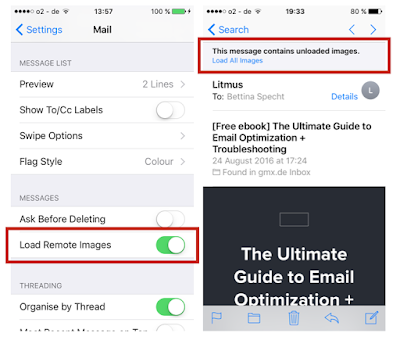 With a market share of 44%, a significant portion of emails are being opened on Apple’s mobile email app. With the release of iOS 10, these stats might change. For the first time ever, Apple gives its customers the freedom to delete pre-installed apps, including iOS Mail app.

Since iOS Mail, with it’s strong support for HTML emails, has traditionally been one of our favorite rendering engines, this could be bad news for email designers. Having the option to delete iOS Mail from their phones, Apple users might be more likely to switch to other email apps, such as Gmail.
Email marketers will have to monitor subscriber opens to see if there’s any movement. If so, this can mean shifting design and testing efforts towards other, maybe more challenging email clients.
Source