BY  CHAD WHITE We love email marketing, and are frankly often frustrated that some companies don’t see its value. To try to convince t... 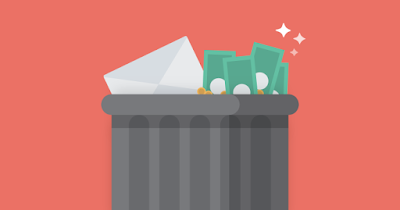 We love email marketing, and are frankly often frustrated that some companies don’t see its value. To try to convince them, we frequently tout email marketing’s stellar return on investment, which is 38-to-1, according to research by the Direct Marketing Association.


We’ve mentioned it in this report and this blog post and this one and this one too—and that’s just in the past few months. And plenty of other email marketing companies have done the same over the years.
Heck, I’ve gone so far as to argue that email marketing’s ROI is closer to 130-to-1.
But despite our collective rah-rah around the ROI opportunity, companies still significantly underinvest in email marketing. For example, brands spend 15% of their marketing budget on email marketing on average, while the channel generates 23% of total sales, according to a study by Adestra and Econsultancy.
As much as we’d like email marketing’s ROI to matter to more brands, it simply doesn’t. Here are some reasons why that’s the case:

1. SOME BRANDS INTERPRET “HIGH ROI” AS “CHEAP” AND “LOW-EFFORT.”

Rather than encouraging marketers to invest more, email marketing’s high ROI may actually have the opposite effect, because it makes some think the channel is easy.
Andrew Kordek, COO and Co-Founder of Trendline Interactive believes this is the case and says, “Let’s not diminish the craft of email marketing by throwing up some meaningless stat to show how awesome email is.”
This split between those brands that think email is “cheap” and those that think it has a “high ROI” is partly responsible for the widening spectrum of email marketing sophistication among companies. While some companies send only broadcast emails with “one size fits all” content, others build an array of segmented and triggered messages with personalized and dynamic content that leverages email’s 1-to-1 capabilities.
The result of this dichotomy is that those in the “high ROI” camp now has a huge competitive advantage over those who focus on email marketing’s inexpensiveness.

2. SOME BRANDS ARE SATISFIED WITH A LOWER RETURN.

If you’re a brand that’s getting a 18-to-1 return on your email marketing, you’re probably extremely pleased with that when you compare it to other channels. For instance, the ROI of radio ads is a measly 6-to-1, according to Nielsen Catalina Solutions. And the ROI of TV ads is 1.3-to-1, according to Deutsche Bank. In that context, it may be difficult to argue for more budget.
However, when you compare that return to the opportunity, it’s a very different story. Recognize that the 38-to-1 stat is an average. That means there are plenty of brands generating returns well in excess of 38-to-1.

3. SOME BRANDS DON’T MEASURE THEIR EMAIL MARKETING ROI, OR CAN’T MEASURE IT WELL ENOUGH FOR IT TO BE USEFUL.

Your email marketing ROI doesn’t show up on any of your ESP’s dashboards. It takes time to calculate—and the more complex your organization and the more channels you have, the longer and more difficult calculating it becomes. And channel proliferation, the debut of limited functionality email clients like the Apple Watch, and the rise of email interactivity is only making email attribution messier and messier.
The percentage of companies able to calculate their email marketing ROI has fallen steadily since 2012, according to the Direct Marketing Association. In 2015, only half of marketers could calculate the ROI on their marketing, according to their 2016 DMA Email Tracker Report.
Unable to calculate an ROI, many brands instead use engagement metrics like opens and clicks to gauge success. This approach puts them woefully out of alignment with organization leadership, which is focused on revenue and customer metrics.
Other brands will simply resort to budgeting based on historical levels, intuition, and internal politics.

4. SOME BRANDS DON’T BELIEVE THE STATS.

38-to-1 may just seem too good to be true, especially if you’re generating nowhere near that. Considering that email marketing’s ROI is nearly twice that of paid search and multiple times that of other channels, it can be easy for some to dismiss this stat is pure hype. The psychological hurdle here isn’t insubstantial.
Picture a slot machine that pays out 38-to-1—not with every pull of the handle, but over the course of an hour. Clearly, you’d stay at that machine with your bucket of coins and feed money into as fast as you can until it starts to pay out significantly less. That’s what you’d expect, but instead people are walking away from that machine and spending time with the next shiny object and other games of sport that pay out a lot less.
The behavior of those using the slot machine calls into question the truth of its payout, because why would people willing choose to spend their money elsewhere?
This is the situation the email marketing industry faces when it comes to this ROI stat.

The crux of why email marketing’s ROI figure isn’t as compelling as we’d like it to be is because it represents both our success and failure at the same time.
On the one hand, the stat says to those generating less than a 38-to-1 return, “You could do better. You should be investing more in the channel and generating a higher ROI.”
On the other hand, that stat says something very similar to those who are generating a better than 38-to-1 return: “You could do better. Since your ROI is so great, you should be investing more in the channel until your ROI decreases substantially.”
Pete Austin, CTO and Co-Founder of Fresh Relevance, makes this argument well, saying in the comments of this blog post:

EXTREMELY HIGH-ROI EMAIL MARKETING IS A SERIOUS MISTAKE. IF YOU ARE GETTING A ROI OF “$43 FOR EVERY DOLLAR INVESTED” OR “ROIS OF $80” IN ANY CHANNEL, YOU ARE MASSIVELY UNDER-SPENDING AND LEAVING A HUGE AMOUNT OF INCOME ON THE TABLE. INCREASE YOUR BUDGET, AND HENCE YOUR SALES, AND KEEP ON DOING THIS UNTIL THE ROI FALLS TO SOMETHING SANE.

It’s a reminder that the goal of email marketing isn’t a high rate of return. The goal is customer retention and a high total return. While it should be a point of pride for our industry that email marketing has a high ROI relative to other channels, whether the return is 38-to-1 or 28-to-1 or 18-to-1 is of little real consequence.
That’s because an ROI of 18-to-1 could just as easily be a brand that has a small budget and unsophisticated email marketing program as a brand with a huge budget and extremely sophisticated program. The total return for that latter company is going to dwarf that of the former company.
All of this is to say…

PERHAPS WE FOCUS TOO MUCH ON EMAIL MARKETING’S ROI.

Beyond being ambiguous, the ROI stat is company-centric metric in many ways. Instead, maybe we should be focusing much more directly on our customers, on our subscribers. Let’s think about what they want in terms of brand experiences.
For instance, consumers overwhelmingly prefer that companies communicate with them via email, with 72% saying they want communications via email, according to research by MarketingSherpa. Postal mail was preferred by 48% of consumers; and text messages, social media, and phone calls were each preferred by less than 20% of consumers.
Even millennials, which have long been portrayed as too cool for email, prefer email. According to research from Adestra, 73% of millennials prefer brand communications via email.
Consumers’ enthusiasm for email also shows itself in the adoption of the channel. The number of worldwide email users will be nearly 2.6 billion in 2015, according to research by The Radicati Group. And by the end of 2019, the number of worldwide email users will increase to over 2.9 billion—a figure that represents over one-third of the world’s population.
In comparison, Facebook had only 1.59 billion monthly active users as of the fourth quarter of 2015
If you agree that consumer preference is more important and less ambiguous than email marketing’s ROI, share this new rallying cry: