What is the Internet of Things? (And Why You Should Care -- A Lot)

by Amanda Zantal-Wiener I've said it before, and I've said it again: I'm endlessly fascinated by how much we, as humans, h... 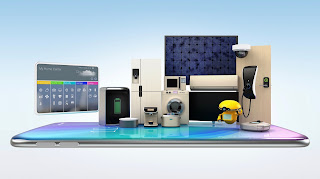 I've said it before, and I've said it again: I'm endlessly fascinated by how much we, as humans, have adapted to emerging technologies.
A few weeks ago, when I covered the Samsung Developer Conference, I had the following thought:

"Think about some of the pieces of technology or up-and-coming topics that, maybe five years ago, we thought had nothing to do with us. Those of us who ignored them quickly fell behind the curve."

The internet of things is one such topic. It's still emerging. Some consumers are still learning how to adapt to it. But it won't stay that way for long.
If I'm being completely honest, the only reason why I give so much thought to the internet of things is that I write about tech. I don't have a smart home, and I don't develop technology or applications that pertain to connected devices.

Now, as a marketer -- I care.
But why do I care? And why should you? And what, once and for all, is the internet of things?
Relax. Today, I'm going to answer all of that.

What Is the Internet of Things?

The internet of things (IoT) is the technology that allows objects -- like home appliances and fixtures, cars, or devices -- to send and receive data via the internet.
For me, it helps to visualize it. When I think of the word "internet," for example, I think of a giant center of content, resources, and cute dog photos -- and the people who can share and obtain this information, all while communicating with each other, via a massive network that keeps us connected.
When it comes to the IoT, then, imagine adding inanimate objects to the situation, exchanging information and communicating with each other (and their end users) via the internet. It allows these objects to execute different commands and actions, making them "smart" or "connected."
For that reason, IoT typically has to be comprised of devices with power -- things that can be turned on or off, like lights or a refrigerator. But that's not always the case, which we'll get into later.
And that's just on the household level. On a much larger scale, IoT is used to connect and power entire transportation or manufacturing systems. It's referred to many as an "ecosystem," in that it's essentially an interconnected community of interacting people and objects, and the environments in which they operate.
This diagram represents it in a pretty simple, comprehensive way: 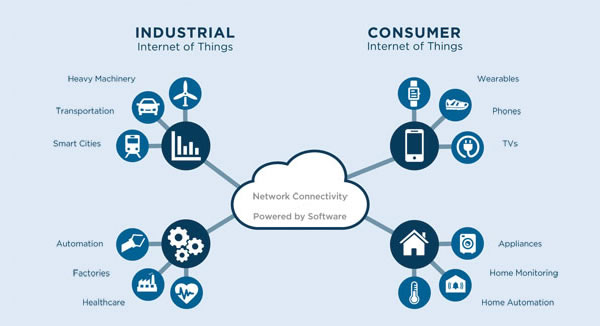 Source: i-SCOOP
Note the cloud in the center of the diagram. It's easy to confuse the cloud -- a system of digital data storage that runs on the internet, versus a hard drive -- with IoT. And while they work well together, they're not the same thing. As Business Insider puts it, "The IoT generates massive amounts of data, and cloud computing provides a pathway for that data to travel to its destination."
Which is really cool, and all -- but how does it apply to your day-to-day work?
As it turns out, IoT might have more to do with you than you think, beyond the ability to control your coffee maker remotely.

So, Why Should You Care?

Consumers everywhere -- many of whom could very well be your customers or within your target audience -- are becoming more and more connected. As of January, about 4.917 billion of us are connected via mobile alone (up 5% from the previous year).
And as we, as humans, become more connected -- so do our surrounding lives and routines. How easy would it be for you to get through an average workday without your mobile device, for example? Personally, it almost seems impossible. It's all I use to make calls, get directions, and hail a car through a ride-sharing app when I need to get somewhere quickly. Plus, it's how I keep an eye on my pet, by way of a handy dog cam app.
Chances are, I'm not alone in my dependence on connectivity. Many of your customers probably are, too. So, where does your brand fit in?
You might not think you have a product or service that, say, can be connected to the internet or to users via a digital network in the ways we described above. But when you consider that 30.7 billion devices are expected to be connected by 2020 (there were 15.4 billion in 2015), you may not be thinking ambitiously enough.

Source: Statista
Case in point: When beverage distribution company Diageo wanted to find a unique (and digital way) to connect sons and daughters to connect with their dads on Father's Day, the company connected 100,000 bottles of whiskey -- real, drink-filled, glass bottles -- to the internet. The reason? So that these 100,000 dads could connect to receive a personalized video message from their sons or daughters.
You have to wonder, if Diageo can turn a bottle of booze into a connected device, what can your brand do? (That campaign, by the way, resulted in a 72% increase in sales in the two weeks prior to Father's Day.)
If you're not sure where to begin, here are three steps to get started.

1) Pay attention to the technology available to you.

Recently, at its annual Developer Conference, Samsung introduced Project Ambience: a small dongle that can be plugged into home objects and devices -- like an everyday speaker, for example -- and turn them into "smart," connected devices.
Now, bear in mind that this technology is equipped only to work with Bixby, Samsung's voice assistant. But it's a start. In my humble opinion, Project Ambiance is one small step at the start of a long, productive road toward smart technology's full capabilities. Other manufacturers are working on similar initiatives (such as Baidu DuerOS and Amazon Alexa, which have created tools for developers to build these AI assistants into applications and products) -- eventually, and hopefully, we'll reach a point where technology is developed that can work with any number of voice assistants.
For that reason, it's a good idea for marketers to keep their fingers on the pulse of resources like these and how they're evolving, so that when they become available for use within your field, you can be one of the first to utilize them.

2) Anticipate the problems you'll run into.

When you kick off any new campaign or initiative, there's always chance that you'll run into a challenge. Sometimes, they're unanticipated -- but whenever you can plan for contingencies, do it.
That's one reason why I love the data in the image below. Although it's from 2015, because IoT is still an evolving piece of technology for many marketers and brands, it's good to keep in mind as you embark on incorporating it into your own strategies. Have a look, and think about the ways you can preemptively solve these challenges. 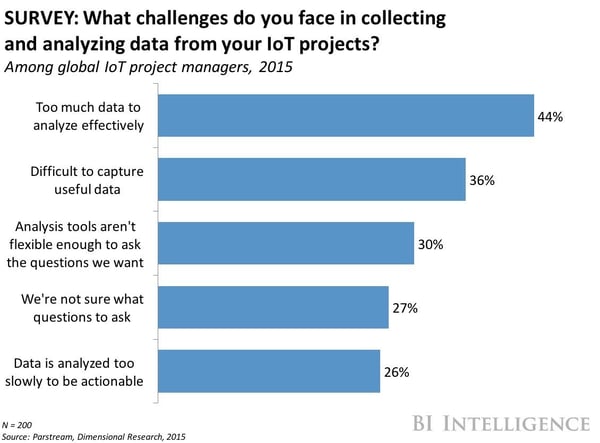 3) Start brainstorming, and look for inspiration in history.

One of the most important elements of staying ahead of the curve in marketing is -- if you'll excuse the cliche -- maintaining an open mind. Let's revisit the words I opened with: "Those of us who ignored [new technology] quickly fell behind the curve."
So, don't ignore it. Embrace it. Start thinking about the ways it can apply to what your business offers.
And if you're seeking inspiration, the Diageo example I used above is just one instance of how marketers have successfully used IoT. There's the ceiling fan company that use IoT to help customize its users' experiences with products. Or, have a look at the manufacturing automation company that uses connected, smart devices to reduce inventory cycles in plants.
In other words: There's still time to figure out where your brand fits in. But don't let it go to waste.