That Exhilarating (and Terrifying) Feeling of Learning a New Skill

by Pamela Wilson “¿Qué quiere para su desayuno?” she asked, inches from my face. I thought as quickly as I could, and managed to ha... 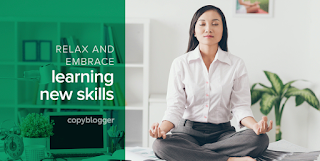 I thought as quickly as I could, and managed to haltingly request a piece of toast. “Pan tostado, por favor.” It was the only breakfast food I could remember from Spanish class. It ended up being all I ate for breakfast for the next week.

It was the first of many frustrations I faced that year. And it taught me an important lesson about embracing that terrifying feeling of being way out of my depth.

Do you know that feeling? If you’re doing any kind of content marketing, I’m betting you do.
In this article, we’re going to talk about how to make the most of it.

I curled beneath the covers with a pounding headache each of the first few nights I spent in Bogotá.
Trying to think and speak in another language was physically painful. Of the six Americans going through exchange student orientation that year, my Spanish was the worst of the bunch.


Those first weeks I spoke like a four-year-old. It was excruciating, especially for someone who took pride in her communication skills.

Despite the painful beginning, I learned a valuable lesson that year. It didn’t have anything to do with the Spanish language. It had to do with losing my fear of looking like a fool.

If you’ve ever tried to make yourself understood in a language you’re just learning, you’ll know what I mean.

You’re proficient in your native language, but to learn a new one you need to start from the beginning. You have to be willing to speak like a toddler for a while.

Once you’ve learned some basic vocabulary, you might begin to speak like a young child. All the while, you mangle words, raise eyebrows, and send people into fits of laughter several times a day.


It’s the public humiliation aspect of learning a new language that no one ever mentions. You’ve mastered your own language, but to master a new one you have to be willing to look like a fool for a while.

And when you realize you can tolerate the laughter and the raised eyebrows, you gain courage you can apply to every aspect of your life.


A fool with a tool

Fast forward … let’s say “many years.” As a content marketer, I’ve realized that the courage to make a fool of myself in public is incredibly useful.

You publish a draft post by mistake. You send out a link that doesn’t work. You discover — too late — that you’ve left out a crucial piece of information.


The only way to get past content marketing mistakes is to make them in the first place.

And it all happens in public. But each failure gets us closer to success, even if the only thing we learn is what doesn’t work.


A learner’s mind is fearless

Children are wired to learn, which is why they make such huge developmental strides in their first years of life. In the space of a year, they go from unable to hold themselves upright to running, from crying to expressing their needs quite clearly.


They fall, shed a few tears, pick themselves up, and keep going. They don’t worry about what people will think — they don’t give it a thought. All the while, they’re learning and making great progress.

As content marketers, we can also apply this attitude to the new skills we’re learning. We can expect mistakes and embrace them when they happen. We can pick ourselves up, brush ourselves off, put our chins up, and keep going.


How to shorten the learning curve

Content marketing, social media, and online business represent great opportunities for us. You can avoid some of those beginner mistakes by studying them before you start doing them.


But you can’t vault yourself from beginner to expert just by reading about them. You have to take the first steps, and prepare for the inevitable bumps and bruises that come with making real progress.